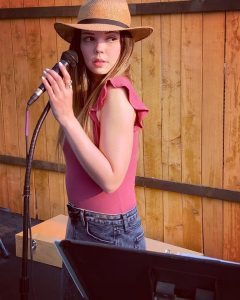 Courtney debuted her solo singing career at the age of 4 in the church. She later continued singing with groups in school, being a part of various choral groups both auditioned and non as a second alto voice part.
Her most notable performance to date occurred at the Benaroya Hall in Seattle, where she performed with some of the best chorale groups from Central Washington University while she studied there under instruction from Vijay Singh.

David has played music since he was very young, starting on piano, and then playing trumpet through high school in the concert and pep band. He took up the electric bass guitar just before graduating high school, but soon began dabbling with playing fingerstyle acoustic guitar after hearing legendary virtuosos like Leo Kottke and Stepehen Bennett.

ourtney and David met in 2014 in Spokane, WA.  They combined their musical talents to form the duo, Courtney & Company, focusing on their shared love of traditional folk, country classics and modern acoustic music.  Courtney’s lower female register, similar to Patsy Cline’s, is complimented only by David’s crafty harmonies and jazzy fingerstyle guitar chops.  Their sound could be compared with the likeness of Tuck and Patti, but with the added depth of the harp guitar’s sub basses, David’s vocals and Courtney’s soulful approach to contemporary music.